A Sense of Belonging

Even if my team is not on the field I feel a connection and a flutter in my heart when the Grand Final approaches. When we made the move from Scotland to Melbourne, I was struck by the enormity of the AFL family and the depth of feeling surrounding football.  Don’t get me wrong, as a Scot I am no stranger to passionate supporters (it is virtually a religion to some over there too!).

What I have particularly grown to love is the experience on game day.  The huge masses of people coming together to support others bravery, commitment, athleticism and skill.  The appreciation of those on the field, their sweat and blood and valiant striving.  The diversity amongst the crowd, the lack of segregation, and the strength of support.  It seems such a positive reflection of our new home.  We started to feel like we belong.  We have built connections with every win celebrated and every loss sustained.

Just like in life outside the stadium, it has been inspiring to observe those who stay the course in hard times when the team might ‘fall short again and again’ because they understand there is ‘no effort without error or shortcoming’.  So despite St Kilda’s absence, on Saturday I will be watching and affectionately recalling the many, many micro-connections built over fourteen hard fought seasons.  The patience shown by seasoned spectators explaining the finer nuances of the game.  The unbridled emotional release accompanying the screams and chants.  And of course the joy of singing the song, sadly not often enough but the infrequency makes each time all the sweeter. 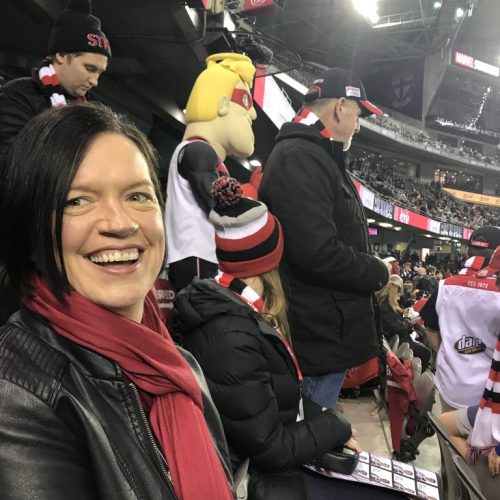 Whether Tigers or Giants ultimately take the Premiership, the real winning comes in the connections built.  It is bigger than a game, it’s a microcosm of society.

“It is not the critic who counts; not the man who points out how the strong man stumbles, or where the doer of deeds could have done them better. The credit belongs to the man who is actually in the arena, whose face is marred by dust and sweat and blood; who strives valiantly; who errs, who comes short again and again, because there is no effort without error and shortcoming; but who does actually strive to do the deeds; who knows great enthusiasms, the great devotions; who spends himself in a worthy cause; who at the best knows in the end the triumph of high achievement, and who at the worst, if he fails, at least fails while daring greatly, so that his place shall never be with those cold and timid souls who neither know victory nor defeat.”